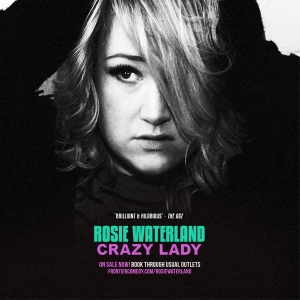 If you’re like me, and you find yourself (somewhat reluctantly) skimming the range of cringe worthy reality television shows which take up the 8:30pm timeslot on numerous commercial channels, there is a high chance you’ve come across The Bachelor. The cringiest of the cringe, a show where twenty-something young women all compete for the attention of this year’s Bachelor. If so, like me, you have probably become caught up (somewhat sceptically) in the seemingly scripted romantic tension of the whole thing. Rosie Waterland is someone who has not only watched the show, but expanded upon it as a sort of commentator, and in doing so she has made my Bachelor focused evenings not only much more entertaining, but she has almost made them redundant.

Rosie Waterland is an Australian television writer, author, and comedian based in Sydney. To quote from her own website: “I’m a writer of all the things and generally find my own jokes particularly hilarious” (Waterland 2017). The more of Waterland’s writing you read it is impossible to separate this statement from what you’re reading, and honestly, you are better off for it. In the terms of her ‘Rosie Recaps’ segment in MammaMia [A blog written by women for women], to understand how Waterland’s writing works you need to be familiar with just how ridiculous The Bachelor is as a form of entertainment. Looking closer at Waterland’s ‘Rosie Recaps’ not only sheds new light on The Bachelor itself, but also brings into account what one can do with such well-honed comedic talent which Waterland has.

It is simpler though, with Waterland’s writing, to show rather than tell. The 2015 season of The Bachelor introduced us to #BachieWood, and me also, to ‘Rosie Recaps’. Waterland titled her recap of this season’s first episode ‘Bachie Wood meets his 19 girlfriends’ and it was from this moment on that I knew I was in for an all new form of television ‘review’, plus, I was already hooked. In addition to the title, the opening lines of this piece not only introduced me to Waterland’s ‘Rosie Recaps’ persona but also the attitude of her writing. With this next line I knew exactly what I was in for, and honestly, I was excited to read the rest: “His last name is so perfect, I don’t care if it’s referring to his brain or his peen I just want to christen him Bachie Wood and have nobody call him by any other name ever again” (Waterland 2015). Though there is a certain finality in Waterland’s tone there is also cleverly played humour, which is something which hooks you into her clever writing style.

When it comes to her writing style it is safe to say that Waterland has a very unique and personal flair to her writing which is hard not to find some enjoyment in. Through the use of a collection of almost absurd metaphorical phrases and outrageous nicknames she manages to convey a multitude of images depending on your own context. In terms of outrageous nicknames, there is no limit. This one from part of Waterland’s recap of episode 5, “Nina heads back to the Girl Prison, and, let’s be honest, aren’t we all just hoping that Totally Laid Back Cool Girl Heather will freak the FUCK out when she sees her [Nina’s] rose?” (Waterland 2015), is one of the less strange nicknames, yet it encompasses perfectly how The Bachelor’s production team painted Heather from the beginning. This speaks strongly for how Waterland manages to take such a formulated reality show and turn it into something which not only surpasses the entertainment value of its source material, but also creates its own genre of writing.

For Waterland, her series ‘Rosie Recaps’ shows how even just a different angle, and a selection of choicest nicknames can make for an entertaining read. Not only is she imaginative in her style, Waterland is wonderfully sarcastic, on the verge of being rather blunt. In any case, this sort of writing in the television industry wouldn’t usually sit too well, yet for Waterland it works, Waterland has made it work. The selection of truer than true statements regarding The Bachelor which are executed in such an overexcited tone, matched with the over the top production of this reality television show cancels out any out of place ridiculousness and makes it the norm. There is a skill to making the ‘out there’ seem common place, yet Waterland does this in such a way that she has made it into an artform.