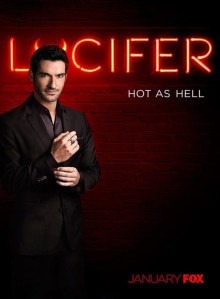 Dance with the Devil

If the Devil came to earth, what would you expect to happen? Here are two options: Option 1, death, destruction, raging fire, and a little bit of punishment; Option 2, Move to L.A., open up a night club, and end up solving crimes with a local detective. You’d expect ‘Option 1’ wouldn’t you? Well, for Lucifer Morningstar (Tom Ellis), after growing bored of his duties in hell, he went for ‘Option 2’, and honestly, as Lucifer puts it kindly, “L.A. is the land of reinvention”, he himself is a prime example. This doesn’t go to mean that ‘Option 1’ is completely out of the question for him. I mean, the Devil and punishment go hand in hand, but never has it been done in such style.

The pilot episode of Lucifer (2016) opens up on a black screen with the song Ain’t No Rest For The Wicked (Cage the Elephant, 2008) overlaying the words:

“In the beginning…the angel Lucifer was cast out of Heaven and condemned to rule Hell for all eternity. Until he decided to take a vacation…” (Lucifer, 2016)

Though a possibly cliched choice of song for the opening of such a television show, the lyrics are apt to what becomes the main drive for protagonist Lucifer Morningstar. Not only that, but the almost playful twang of the guitar and sickeningly smooth lyrics of this song manage to embody the suave character of Lucifer himself before he has even come on screen. This is reinforced as the scene opens up on, a well-dressed man speeding through the streets of L.A. in a shiny black ‘61 Corvette, a character later introduced as Lucifer Morningstar. Sirens soon blare and a smirk lights up the man’s expression, as he is pulled over Lucifer is disturbingly calm, and it is as the policeman pulls him over that things get, well, to put it simply…weird. Lucifer is asked if he knows why he was pulled over, and his response manages to sum up the smooth talking characterisation which makes up the first and most visible layer to his personality.

“Well, obviously you felt the need to exercise your limited powers and punish me for ignoring the speed limit. It’s okay. I understand. I- I like to punish people, too. Or at least I used to.” (Lucifer, 2016)

As the scene plays out, Lucifer proceeds to try and bribe the police officer before prompting him that he breaks the law sometimes too. The strangest thing is though, the policeman answers with an almost glazed look in his eye. This interaction becomes commonplace within the episode, but there is something beautifully comical about a policeman answering that “Sometimes, I put my siren on and drive really fast for no reason at all, just ‘cause I can.” (Lucifer, 2016) plus for me, it was near impossible to get Lucifer’s gleeful smirk from my mind as I watched the rest of the episode.

Something within the episode which could only be seen as minor but really plays a larger part in making this new embodiment of such an overly done character who he is, is through the addition of perfectly timed father related humour. Not only does this reinforce the character of Lucifer as a rebellious child but also embeds him within the L.A. culture as he rejects his father, God, in an almost snarky manor. As well as this, this level of humour is very cleverly played within the overall story of the episode, and manages to defuse moments of tension as they arise. As it is not something over worked, the cleverly written humour within the episode not only adds to the character of Lucifer, it creates him.

As far as pilot episodes go, Lucifer (2016) creates a protagonist that you know from the beginning you are going to hate to love. He is charming, dramatic, playful, and – for some – quite sexy, but his morals (unsurprisingly – he is the Devil, of course) are far from that of an angel, or so you think. As the episode progresses, you are able to peel away the layers of suave charm, bitter sarcasm, and his lofty demeanour to reveal someone rather sensitive, and possibly even kind – even if Lucifer can’t see it himself. This adds a very interesting level of characterisation which not only keeps you guessing but also paints a very different picture of what nearly everyone understands Lucifer to be.