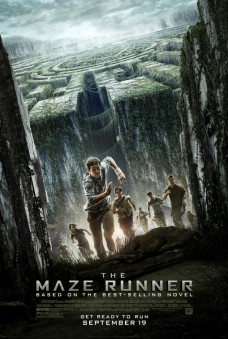 I actually saw this before reading The Maze Runner by James Dashner (my review here), also wait until I had actually read the book. So when I did watch it I had no idea about the movie at all, apart from the fact that it had a Maze, Dylan O’Brien and the guy who was in not just one but two of my favourite childhood (well one was childhood anyway) movies (Thomas Brodie-Sangster – Nanny McPhee and Love Actually). I left the cinema wiping away tears and in a slight amount of shock, I had not expected the ending I’d just seen and reading James Dashner’s Maze Runner Trilogy had just hit the top of my to-do list.

To say I loved this film is probably an understatement, having read the book now, I could see that the casting was pretty much perfect, and the fact that Dylan O’Brien – one of my favourite actors and Tomas Brodie-Sangster – a childhood favourite were starring, along with a couple of other actors who I now love as well made it so much better.

As an adaption, after reading the book I could pick changes that Wes Ball (Director) had made, some I thought worked, and other bit’s I missed and wish they could have kept.These ended up being little things such as Newt not calling Thomas ‘Tommy’ and the lack of the telepathic talking between Thomas and Tereasa, which to the normal movie goer wouldn’t have made much difference, but as a huge fan of the books and of the Newt/Thomas relationship I really wished the nickname had stuck. There are a couple of changes though with the ending, such as Gally’s supposed death and the way in which Chuck died which didn’t give both characters the ending I felt they needed, which the original story had.Also, as I have now finished reading the trilogy, I am not sure how these changes will fit in in the long run, and how they will effect events in the next two movie sequels.

All nitpicking aside I really do recommend this film,  I think that the Ball has done an amazing job with  direction and all the actors do an amazing job. The whole thing is done really well and all the known CGI is highly believable. The soundtrack is awesome, and I’ve  been listening to it non-stop since it came out. My favourite tracks being: The Maze runner, Chat with Chuck, and Finale.

What did you think? And if you haven’t seen it then are you planning to?I think it is really worth it!

Thanks for reading,
Anna x