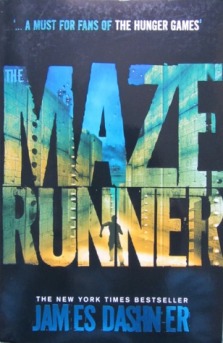 When Thomas wakes up in the lift, the only thing he can remember is his name. He’s surrounded by strangers—boys whose memories are also gone.

Outside the towering stone walls that surround the Glade is a limitless, ever-changing maze. It’s the only way out—and no one’s ever made it through alive.

Then a girl arrives. The first girl ever. And the message she delivers is terrifying.

I made a personal boo-boo so to speak with this book, and saw the movie first – it didn’t exactly ruin the book for me, as there are many differences between the two, but I always like to read the book first so I can create my own image of the characters in my head.

James Dashner has created a unique world in The Maze Runner, a story set in a post-apocalyptic world where the organisation WICKED is running experiments to try and find a cure for The Flare. A group of boys who call themselves Gladers, are sent into the center of a giant maze with no memory of their previous lives and what has happened to the earth. With no other choice they build new lives in ‘The Glade’, while trying to piece together what they were doing there and find a way out of the Maze. This is the world Thomas get’s thrown into, and from the moment he does, things begin to change.

From the first page I was hooked, as the reader you start off just as confused as the main character, Thomas, who is introduced hurtling upwards in an enclosed metal cage towards what you eventually are told is ‘The Glade’. This is an interesting change, as the reader you usually know more than the protagonist from the get go, but being just as in the dark about what was happening as Thomas is, keeps you asking questions which don’t get answered until much later on in the story. You take the full journey with Thomas, meeting the other characters and learning about the crazy situation he’s been thrown into gives an insight into the happenings of the story which can rarely be matched. For me, this is what really gripped me, the unusual beginning which set off a domino effect of questions which just have to be answered.

The main thing I absolutely loved though about this novel is that there was little to no romantic plot – the main relationships are the strong friendships which the boys have made through their adverse situation. They have built their own world, with jobs, leaders and rules to keep the place running smoothly and keep everyone safe. ‘The Box’ had been sent up every month with new supplies and they used what they were given, they didn’t mope, they used what they had to survive, building a family in the process.They develop their own language tropes, something which, though it feels odd to read at the start, seems normal quite soon into the novel, and brings another interesting and amusing change to the writing.

The friendships which Thomas makes with Chuck, Mihno and Newt are three which are completely true despite the forced circumstances. There is not just loyalty and love, but also an unspoken trust between the boys which makes them seem like brothers rather than just friends. It is these friendships, and the banter between them which almost helps you to forget the looming threat the maze brings, but then made the climactic part of the novel even more exciting and heartbreaking for me.

I absolutely loved The Maze Runner, and I would definitely recommend it, no question. If you love a great dystopian-future/post-apocalyptic novel which a good ounce of friendship, brotherhood and a plot which grips you to the very last page and beyond then this is the book for you!

Thanks for reading and I hope you have a good week!
Anna x

One thought on “Book Review: The Maze Runner, James Dashner”